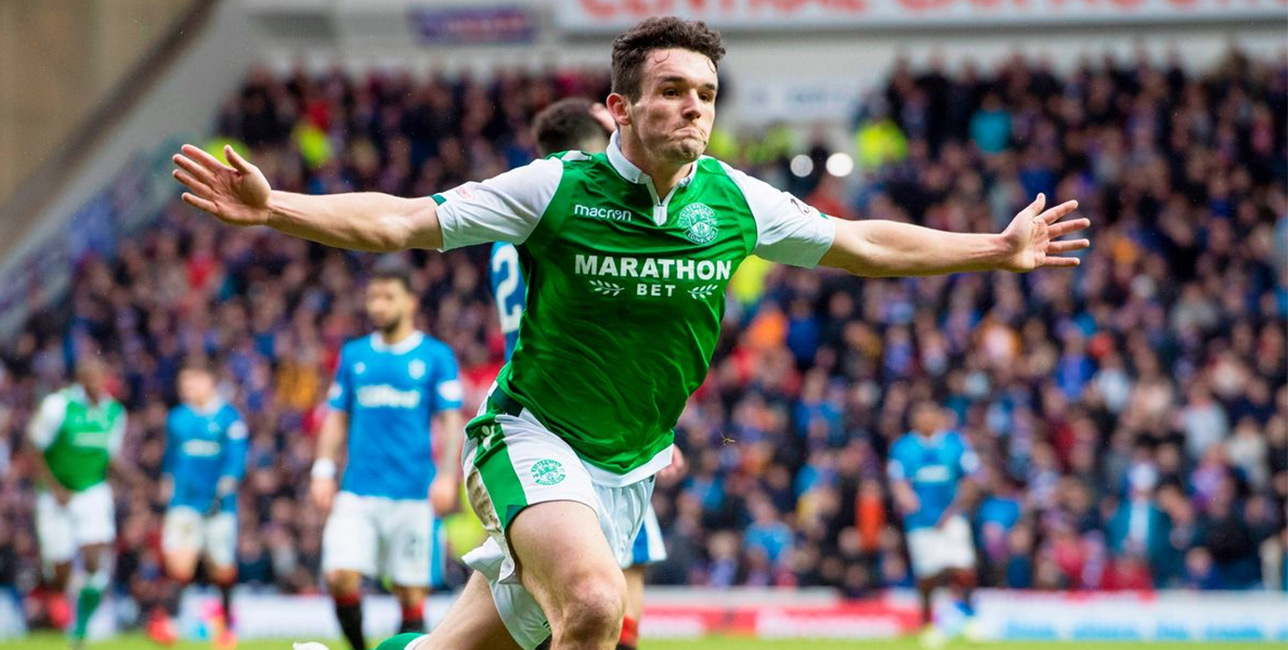 With the English Premier League just finished and the Scottish Premier League back underway it is worth having a look at some of the players who have flourished down south following time in Scotland. The Scottish game often gets a hard time but when you look at those making an impact in England’s Premier division, this criticism is often unjust. Not only have several Prem starters spent many years north of the border, a considerable number have benefitted from loan spells too. Here we have a look at some of those who have made waves in both nations and create an XI based on their performances over the past few seasons.

In terms of Goalkeepers, those with a Scottish connection currently tend be in back-up position. Leicester’s Danny Ward had a successful loan spell at Aberdeen, Norwich’s Michael McGovern was a key man at Hamilton and Fraser Forster’s Celtic performances caught the attention of Southampton. However, two continue to secure the no.1 jersey (one with more success than the other) and both played for the same club: Falkirk FC.

Despite now playing in League 1, the Bairns previously enjoyed periods in top tier. In this time the club enjoyed impressive spells from Norwich’s Tim Krul and Premier League winner and Leicester shot stopper Kasper Schmeichel. In successive seasons the pair arrived in the hope of game time and experience. Both found this and impressed, with Schmeichel receiving man of the match in a performance against Rangers while Krul gained a loan extension after strong apperances. Since then the duo have been prolific both in the Premier League and at international level. Schmeichel’s notable run with Leicester has seen him play Champions League football as well as receiving a Premier League winners medal while Krul has had a long run in the top flight and his penalty-saving abilities helped the Netherlands secure third spot in the 2014 World Cup.

For the XI Kasper makes the cut following another successful season for the Foxes which saw him make joint third for clean sheets in this campaign with 13. While Krul made the second largest number of saves with 132, he also conceded the most goals with 68 passing by him into the net.

Though small in number, it is in defence that SPFL players have made the largest impression. The four players covered have all made huge impacts this season with two receiving a winner’s medal as a result.

Robbo’s rise has been impressive and well documented. Having been dropped from the Celtic youth academy, Robertson joined Queen’s Park in the Scottish Third Division. He then joined Dundee Utd where he had an impressive spell which caught the attention of many and earned him a move to Hull City and eventually Liverpool. The past few seasons have been joyous with the Champions League and Premier League amongst his accolades. This year saw another impressive string of performances highlighting the consistency in his game. He finished the season in third place in the overall league assist table, third for defensive clean sheets and fourth for most passes completed, emphasising his ability both in attack and defence.

Another Liverpool stalwart, VVD made the move to Merseyside following a successful spell at Southampton and previous to this, Celtic. The Dutchman was impressive during his time with the Glasgow side finding himself in the PFA Scotland Team of the Year in both of his campaigns in Scotland. The size of the fee paid by Liverpool for the defender raised many eyebrows, but van Dijk has worked to his worth in a period of great success for the club. The centre-back has been a prolific member of a strong defensive unit while also being able to provide goals himself. His time at Liverpool has seen him win the Champions League, the Premier League, UEFA Men’s Player of the Year and second place at the 2019 Ballon d’Or.

Irishman Doherty is a key man for Wolves. His attacking threat and defensive attributes have contributed significantly to what has been an impressive and extremely watchable season for the Molineux side. What is perhaps less known to many is that Doherty too played in Scotland. In the 2011-2012 season, Doherty appeared 17 times for Hibernian including a performance in the Scottish Cup Final. This campaign, with 12 clean sheets, 4 goals and 8 assists (making him joint third top scorer and the second highest assister for Wolves) Doherty makes a great addition to the XI.

Despite an injury ridden first season with the Gunners, KT is one of the few players to have really benefitted from the season extension, using the break to recover and playing some of his best football on return. After a long and successful spell with his boyhood club Celtic which saw him win four league titles, Tierney gained a move to Arsenal for the reported fee of £25 Million. The latter stage of the season saw the 23-year-old find the excellent form he showed at Celtic and gained him much attention. On the final day of the campaign he rounded off this fine spell with a goal and an assist.

In midfield the list is long, impressive and laden with assists. Over the past season this has included John McGinn, James Maddison, John Fleck, Ryan Fraser, Stuart Armstrong, Robert Snodgrass, Aaron Mooy, James McArthur, Kenny McLean, Sean Longstaff and recently Chelsea’s young starlet Billy Gilmour. Snodgrass and McArthur are unlucky to miss out on the XI in a season in which they have both had the second highest assist rate for their respective clubs.

Super John McGinn earned the plaudits of many a Scottish fan before making the move to Aston Villa where he has won over a new army of supporters. Another to suffer from a serious injury this season, McGinn started the campaign on a flyer, scoring on the opening game of the season against Spurs and then again, a few games later at Arsenal. His work rate, leadership and ability has meant that many are calling for the Scot to gain a big move in the transfer window.

On loan from Norwich, James Maddison made himself a fans’ favourite when he scored a stunning last-minute freekick for Aberdeen to beat Rangers in the 2016-2017 season. He showed his ability and flair in a period with the Dons which Maddison has mentioned as being key to his development. From there his talent grew, earning him a call up to the first team at Norwich and later a big money move to Leicester City. He’s become an important player for the club this season contributing 6 Premier League goals and 5 assists.

John Fleck has been a key man at the heart of the Sheffield United midfield for a considerable number of years now. His physical presence, vision and work-ethic have been prominent in his period with the club that has seen them rise from League One to the Premier League. The midfielder starter his career at Rangers working his way through the youth ranks before breaking into the first-team. He eventually left during a tumultuous period for the Glasgow side. Fleck’s contribution has twice earned him Sheffield Utd’s player of the year and leaves you questioning why he has received so little caps at international level. This season Sheffield Utd have had an incredible first season back in the Premiership and the Scottish midfielder has been an integral part of that. Despite periods of injury, Fleck is the joint second-top goal scorer for the Blades.

Despite an inharmonious end to his time at Bournemouth and a less prolific season to the one prior, it is clear that Fraser must make the starting eleven. The Aberdeen product made his mark in the 2012-2013 season making a significant impact which twice earned him the league’s Young Player of the Month award. His performances caught the eye of AFC Bournemouth who signed him for the modest fee of £400,000.  Following a loan spell at Ipswich Town, Fraser eventually broke into the first team at Bournemouth and into the Premier League. He scored his first goal after coming off the bench in a 4-3 victory over Liverpool in which he also provided two assists. The assists didn’t stop there, and this is where Fraser has made a name for himself providing the second highest assists in the league in the 2018/19 season and the second highest assists for his club in the season just finished.

Armstrong has not always been a starter since his move to Southampton but at the latter stages of this campaign he really came into his own. Starting his professional career at Dundee Utd where he played alongside the aforementioned Andy Robertson, the midfielder quickly made a name for himself for his strong passing ability and command of the game. A successful spell with the Tangerines saw Glasgow’s Celtic make a move for the talented young player. There he continued his fine form winning several honours with the club. Eventually he made the move to England when he signed for Southampton for £7 Million. This season Armstrong has excelled once again contributing 5 goals and 4 assists, making him the second most prolific player in terms of goals and assists for the Saints.

Currently, like Scotland’s national team, options up top are sparse. One man, however, made a serious impact this season, despite, struggling to find form in Scotland. Burnley’s Jay Rodriguez gets a special mention having spent time on loan in the Scottish lower divisions at Stirling Albion, but with only one position remaining, it is Norwich’s Pukki who makes the grade.

Finland’s Teemu Pukki became a household name at the start of this season when it seemed like he couldn’t stop scoring for the Canaries. The striker’s form was a continuation of his fine goalscoring record form from the previous season which saw him become the Championships’ top goal scorer and player of the season. In Scotland, however, he couldn’t quite find his feet. A short spell at Celtic was considered by many to be disappointing. Despite that, Pukki has gone onto be a great success both at club level and for his international side. He therefore leads the line and takes the final spot the XI.

The completed side shows just how much the Scottish game has to offer whether it be through youth products or as a place to gain experience. With recent signings making a considerable impact, it will be interesting to see which players will be next to make the move. 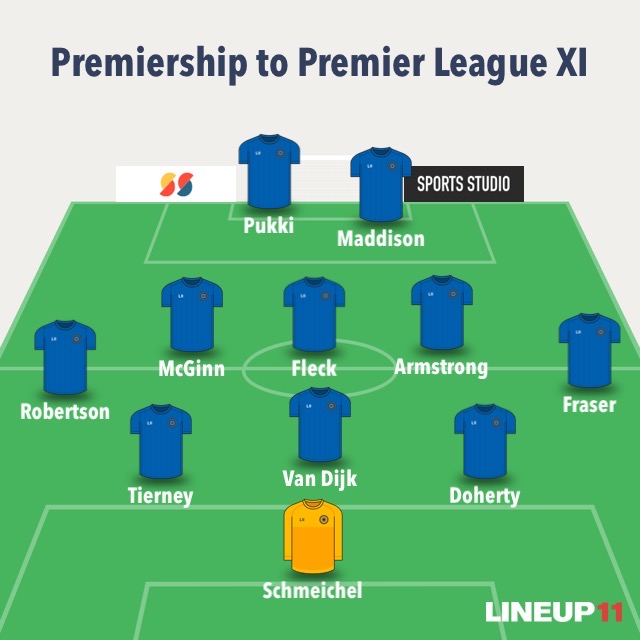