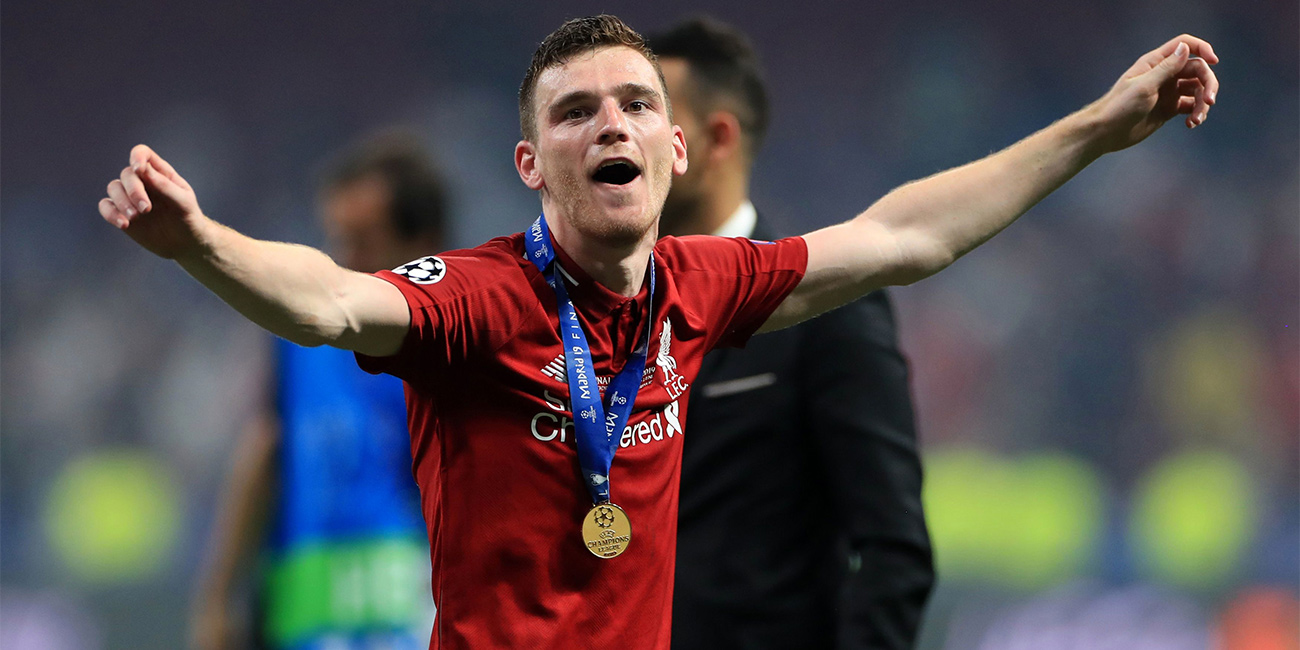 Who are the Five Best Scottish Players to Have Played in the Premier League?

There is undoubtedly a long way to go until Scotland can enjoy facing the likes of Brazil in front of millions once more, but the passion of Scots is never in short supply.

Even now, before the uncertainty that comes with a draining Euro 2020 qualification playoff, there remains hope that a new heroic figure will emerge and inspire the flower of Scotland to blossom once more. With that in mind, we look back today on the five greatest Premier League players from the land of the brave.

First up is the very topical Andrew Robertson, who is on course to become part of a record-breaking Liverpool team after relatively humble beginnings. The Reds' current win-rate is set to take them way past Manchester City’s existing record of 100 points, not to mention grant them the earliest title win confirmation in Premier League history.

With Robertson making significant contributions towards that, his signing for just £8m from Hull City, back in the summer of 2017, is arguably one of the greatest bargains Liverpool have ever enjoyed in the Premier League era.

Yet, it was Robertson who terrorised Wan-Bissaka all afternoon, looking by far the more valuable player in the course of yet another Reds victory. It was as clear a demonstration as any, as to why English talent should not automatically come with an inflated price.

Ultimately, Robertson’s abilities add further fuel to the belief that marauding defensive wingers can be as effective as traditional attacking wingers when deployed correctly within a fantastic team. Thus, for all of Scotland fans' learned pessimism, this can only have a positive knock-on effect on his national team's fortunes.

Without Robertson, it is difficult to imagine Liverpool winning the title this year with such ease. Significantly, those that check these premier league prices can see the increasing likelihood of Liverpool breaking at least one record that shows their dominance.

Back in 1995, a similarly dominant mindset was necessary for another Scot to claim the ultimate domestic glory. That man was Blackburn’s Colin Hendry, whose tireless efforts in defence ensured that Ewood Park’s 81-year wait would come to an end in dramatic circumstances.

Hendry’s Rovers odyssey proved that love sometimes is stronger the second time around, with the Keith-born fullback having left Blackburn in 1989 after a two-year spell that saw him average a goal roughly once every five games.

Though Hendry was a fantastic acquisition for City, he was soon exiled into the reserves as part of a squad development scheme. His return to Blackburn in 1991 led seamlessly to Rovers’ 1992 promotion, which saw them become one of the 22 founder members of the new Premier League.

Forming an immense spine behind Rovers’ midfield captain Tim Sherwood and a certain Alan Shearer up front, Hendry grew in stature as Rovers climbed the table, culminating in their glorious title win.

Earlier in the 1994/95 season, barely forty miles away from Ewood Park, another Scot had etched himself into Premier League folklore. That man was Everton striker Duncan Ferguson, who had done much – both in deed and spirit – to lift the blue half of Merseyside away from catastrophe.

‘Catastrophe’ is the only way to described how that campaign began for Everton, with the Toffees failing to win until 1 November and claiming just eight points from the opening fourteen games. That was the breaking point for the Everton board, who sacked manager Mike Walker just ten months into his Everton reign, to be replaced by former Everton legend Joe Royle.

One of Walker’s last acts was to sign two players from the Scottish league, namely Ian Durrant and Duncan Ferguson, on loan. Contrary to the events to come, it was Ferguson that stood as the more peripheral figure, but with Joe Royle and assistant Willie Donachie changing up Everton’s game plan to a more direct one, Ferguson’s aerial ability would become more relevant.

It was first tested in the Merseyside derby of November 1994, which saw Ferguson bullied and outmuscled until he was riled into action by a foul tackle from Neil Ruddock. Soon after, he headed home an inch-perfect corner from Andy Hinchcliffe, setting Everton on-course for a 2-0 win, and lighting the blue touch paper in a gruelling, but successful survival campaign.

Many Everton fans will point to that moment as a turning point, and Ferguson would continue to act as a figure of menace up front, across two spells with Everton totalling nearly ten years, until his retirement in 2006. The Scot remains present at Goodison as a coach under the burgeoning Carlo Ancelotti regime, having laid the foundations for progress by a return of five points from nine as caretaker manager.

Back in October, Southampton goalkeeper Angus Gunn became the second generation of ‘Gunn’ to concede 7+ goals in a Premier League match. Twenty-seven years prior, his father had recorded this feat in a 7-1 reverse against Blackburn Rovers, but it was merely a small jar of vinegar amongst an array of fine vintages.

From a habit of headbutting the crossbar to his unbelievable saves, Gunn was one of several breakout stars in a Norwich team that many believed would sink without trace in the inaugural 1992/93 Premier League campaign. While a third-placed finish and a negative goal difference betrays a heavy reliance on attack over defence, Norwich still showed the nerve necessary to hold out in the latter stages of some crucial matches, thanks to Gunn’s superlative leadership qualities.

Such a degree of composure and alertness was particularly crucial during Norwich’s subsequent run in the UEFA Cup of 1993/94. The highlight of that run, as any Canaries fan will immediately assert, was the 2-1 shock victory over Bayern, who many believed were unbeatable on their own turf. The return leg at Carrow Road demanded the same type of resilience from the Norwich backline, and a 1-1 draw did the trick, putting the East Anglian club – however fleetingly – firmly in the spotlight of triumph.

Unlike many other great Scotsmen, McAllister’s life under the Premier League brand began as a defending champion. He, along with the likes of David Batty, Gary Speed and Gordon Stachan had formed a truly formidable midfield, but Leeds found the crown weighing heavy on their collective heads. A 17-place drop in the league, precipitated by an embarrassing blank of away league wins in 1992/93, saw McAllister and his peers lose their former shine.

After one short-lived run in the 1995/96 UEFA Cup, and a runners-up medal in the 1996 League Cup final, McAllister was acquired by old Leeds teammate Gordon Strachan to keep Coventry afloat. McAllister was part of a squad that did just that, by the thinnest of margins in his first season at Highfield Road, and the Sky Blues continued to stand as little more than relegation fodder – until their actual relegation in 2000/01.

Coincidentally or otherwise, the start of that campaign had seen an eyebrow-raising move for the now 35-year old McAllister to Liverpool on a free transfer.

Far from being a geriatric waste of space, he proved an excellent pivot point for some of the improving Liverpool’s best moves en-route to a treble, which consisted of the FA and League Cups, along with a UEFA Cup triumph. That season alone ensures McAllister's place amongst the very bravest of Scots ever to grace the Premier League.